Showing posts from July, 2009
Show all
July 16, 2009
Have you noticed that there are a lot more smokies on the roads these days? I am sure it is because the states are broke but can't exactly raise taxes. What easier and more regressive way to raise money than to unleash cops to pull over people for significant crimes like speeding, failing to signal when they change lanes (or, in many parts of the state, to be DWB)? There are noticeably tons of police out here in the Great State of Illinois, and apparently the fines have gotten huge for tiny infractions (one mile over, for example). I've been noticing a similar increase in the police presence on the highways in Virginia. Driving on 95 to DC at the end of last week I saw at least one police car in every turn around on the road and/or a pulled over motorist. I am not exaggerating--in the space of the 90 minute drive from Richmond I saw a cop waiting to pounce or issuing a ticket almost the entire time.
Post a Comment
Read more
July 16, 2009
I am sure Nunal is not alone in seeing absolutely nothing at all unseemly, let alone untoward, in Goldman Sacks reporting huge multi-billion dollar profits and giving huge salaries and bonuses at a time when the taxpayers have given away billions of dollars to the firms that owed Goldman money such as AIG, when the government oversaw the dissolution of Goldman's competitors, all under the steely guidance of former Goldman execs who have resisted efforts to tighten the regulatory structures that might somehow interfere with such all-American hog wallowing. And Nunal is equally confident that you will agree that we the taxpayers out in "real America" should not think that the oligarchs lavishing ever-increasing riches on themselves should be asked to pay more in taxes so the unemployed and underemployed in the rest of country can have something as outrageous as health insurance.
Post a Comment
Read more
July 16, 2009
I am visiting my folks with the Lil Buddha and typing this on my mom's computer, which means it will be short since she has her computer arranged on a sideboard thing such that it is virtually impossible to use. The keyboard is on a slide out thing that bounces a good 1.5" with each key stroke, and the mouse pad is in a drawer (on top of the drawer contents), you pull out the draw and put the mouse in it to use. Not really adequate for even the barest fulmination here on Nunal. Not much time either, Lark is going in all directions at once. She is having a great time, especially playing with all the old toys we had growing up (nothing in this house ever being discarded)--cars and trains being her favorites. But one thing that has really caught her eye is the toy chain saw. I never registered that we had grown up with a toy chain saw (complete with working trigger so kids can gain a rudimentary understanding of the functioning of a real chain saw) but I would have liked
Post a Comment
Read more
July 09, 2009
And you can see the advanced state of Lark's development in this video, where she explains what is on her mind at the moment.
Post a Comment
Read more
July 09, 2009
The total failure of the daycare system is this country outside of the elite circles and certain costal enclaves is a clear sign of the failings (if not outright failure) of the marketplace. It is an interesting analog to the health care crisis. As any parent will tell you, it is almost impossible to find affordable and acceptable daycare (and good daycare is a whole other order more difficult) despite the fact that it is essential to have if one has a "job". This is as strange as it sounds. Somehow the market has utterly failed in supplying the demand. It isn't as if people have stopped churning out babies (exhibit: Palin family). Every daycare facility that is not either a Christianist front or a death trap with kids wallowing in their soiled diapers has a waiting list of a year or more. All of them are expensive. All of them have inconvenient hours. And, all of the daycares serve garbage as food and refuse to let you bring in your own. They all revert to a m
Post a Comment
Read more
July 09, 2009
We extracted honey today from the hives at the school. One (1) student showed up to help, which a charitable sort might not consider too bad I suppose, given it's midsummer and all. But it does bespeak a certain lack of obsession on the part of this year's class. Lack of obsession has no place in a beekeeper's heart. Though, it is true, fewer students meant less honey fell off the truck than is often the case. I think we got a bit over 100 pounds today, with a several more supers (another 70-80 pounds perhaps) still waiting to be capped by the bees before being harvested. Not bad for a bunch of bugs, especially given the apocalypse I returned to last year. I am supposed to be getting pictures soon and will post them -- if and only if they show me as I was, heroically and stoically getting stung multiple times by the one particularly ornery hive, all so you can sweeten your tea.
2 comments
Read more
July 02, 2009 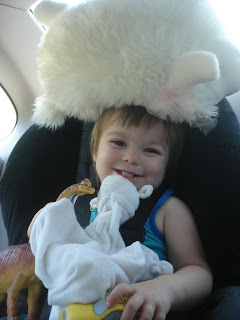 This is working a bit backward, but the whole period of being on the road started with Skye and Miss Lark and myself headed to the mountains for few days of getting away from Tidewater, very welcome and much needed. Like a true member of this family, Lark insisted on spending the drive thoroughly surrounded by her possessions. The dominant phrase of the weekend was "more dinosaurs". She never once let go of that dinosaur. Lark seems to be defying convention and gender restraints in her love for dinosaurs. We'll be in Chicago in a couple of weeks and when we get to the Field museum it is possible she will explode. Since we were driving right by Rockfish Gap I insisted that we stop and visit General Lee. Skye was not excited but, like the Army of Northern Virginia, I won on sheer willpower. Last year when we hiked through Rockfish Gap on the AT (one of the few places the AT crosses an interstate in Virginia) we stopped at the run down little tourist info spot
Post a Comment
Read more
July 02, 2009
Nunal has been fairly static except for the periodic apologies for the lack of posting..usual disclaimers... I've been all over for the past couple of weeks. I just spent several very enjoyable days at the conference of the Society for Historians of American Foreign Relations. I presented a paper on my research on extraterritorial crime, extraterritorial abduction and extradition which basically compressed a couple chapters of the book I am writing. I thought it was pretty good and, more importantly, other people did as well. One never knows, toiling away in obscurity. The paper was, as you might imagine and as one historian said, rather "densely constructed", or as I would describe it more directly -- following the lyrics to one of Lefty Frizzell's great songs--"so round, firm, so fully packed." if you want to read it, send me an email and I can send it to you. (But that doesn't mean you won't still be on the hook to buy the book when it is
Post a Comment
Read more
More posts