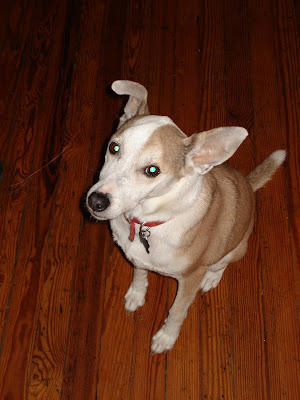 Wee Oscar, 1998-2013       He was a sweet and gentle little dog who brought a lot of love into this world.  He died Thursday with great dignity and grace. He will be missed.
Post a Comment
Read more
May 29, 2013
My blogging has been pretty weak of late. Summertime, blah blah blah. But there is plenty of excellent blogging on conjunto music and on Valley related things generally over at Pharr From Heaven .  Go catch up on the past few years, I'll be back in a jiff.
Post a Comment
Read more
May 24, 2013
I hate hurricane season, which is just another reason to dislike this area-- being by the ocean and all.  So I do not greet the news that this season is forecasted to be an especially active one very kindly. Last year I was driving to the Blackpot festival in Louisiana and heard on the news that this massive storm was heading to the coast. There had been zero mention of it so it was surprise. I had even left our attic windows open.  I had some big fears of coming back to a lot of problems but the storm (Sandy) instead decided to destroy the NE and leave this stepped on area alone.  Thankfully.
Post a Comment
Read more
May 24, 2013
Ok, if you are looking for a sharp criticism on the speech and on Obama policy, Kevin Jon Heller's comments ought to do the trick: " There is a classic jury instruction that reads, “[a] witness who is willfully false in one material part of his or her testimony is to be distrusted in others. You may reject the whole testimony of a witness who willfully has testified falsely as to a material point, unless, from all the evidence, you believe the probability of truth favors his or her testimony in other particulars.” I immediately thought of that instruction when I read   Obama’s national-security speech   today, because it contains such a blatant lie that it is impossible to take anything else that Obama said seriously: And before any strike is taken, there must be near-certainty that no civilians will be killed or injured — the highest standard we can set. The United States, of course, has used drones to attack   wedding parties . And   funerals . And rescuers . And
Post a Comment
Read more
May 24, 2013
I think about the drone program a lot because the extraterritorial issues in it so directly intersect with my research and teaching, but also because it has a moral dimension that I consider essential to confront. Butr closer to home I still worry about the killing with impunity that is the standard for local police forces, let alone the highly militarized wings of them. It is again sadly easy again post a depressing story of police killing in the US to frame some of the outrage directed toward the Obama drone program.  I am sympathetic with the concerns, but I think we should be contextualizing it all with consideration of  Obama pointed out that we allow SWAT teams to kill people in the U.S. who are considered dangerous, such as snipers. " or the record, I do not believe it would be constitutional for the government to target and kill any U.S. citizen—with a drone, or a shotgun—without due process. Nor should any President deploy armed drones over U.S. soil. But when a U.S
Post a Comment
Read more
May 24, 2013
I just spent a week in San Antonio playing, listening to, and talking about conjunto music. Definitely among my favorite places to be.  Saw a bunch of old friends and made some new ones, learned a lot of tips on the bajo sexto from old timers, and of course heard some great music that perfectly meets the needs of the soul.  All linked together by a series of awesome meals...  I'll get around to posting some details of that time when I have more of a moment to post some pics.
Post a Comment
Read more
More posts