Showing posts from May, 2010
Show all

Diversions for the weekend

May 28, 2010
" Germans are stealing more beehives " sounds like it could be a headline from the Onion, but it is real. "Caught in the Act Over the past few years, the Apicultural State Institute at Hohenheim University in Stuttgart, which specializes in agricultural studies, has had 72 bee colonies stolen from various locations. And in Bavaria, a honey producer even stole queen bees from his own beekeeping collective. This spring the Apicultural State Institute set three camera traps -- shortly afterwards the cameras caught a 71-year-old, hobby beekeeper from Nürtingen in the state of Baden-Württemberg, in the act of bee abduction. To counter the increasing bee thievery, some apiarists have installed GPS devices in their hives so that they can track the colonies' whereabouts online, in case of theft. Others have taken to using honeycombs in unique sizes so that their bees cannot be so easily placed into other hives."
1 comment
Read more

"to protect and serve" 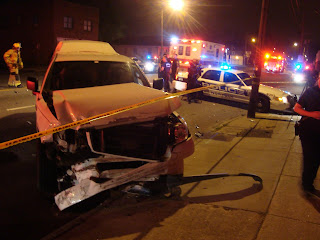 I spent the weekend working on my project on Mexicanization of social spaces in North Carolina, which was both enormously interesting and a lot of fun (more about it later in depth and with illustrations, when I can collect my thoughts). As I was driving back home I was lucky not to get killed when a fleeing thief slammed his car into my truck at high speed. He was being chased by the heroic Norfolk police following a break-in at a state ABC liquor store several miles away. Like most if not all high speed police chases, this one ended with a crash into some unlucky soul, which was me. I didn't really have time to react, it happened so quickly. As the car came out of a side street faster than I could do anything but think "what the fuck, this guy is coming so fast!!!" I found myself crashed on the other side of the street facing the wrong way with my front end smashed, air bag blown and my truck cab filled with smoke. I have no memory of the time between the impact
Post a Comment
Read more
May 20, 2010
It goes without saying that it is difficult for historians to get published...and they have to endure an execrable job market...blah blah blah. But I must ask, how is it possible (or even a teeny bit just) for an utterly disgraced historian like Michael Bellesiles, who lost his tenured position, had his Bancroft Prize yanked ( Columbia found "After considering all of these materials, the Trustees concurred with the three distinguished scholars who reviewed the case for Emory University that Professor Bellesiles had violated basic norms of acceptable scholarly conduct"), and lost the profession's respect because his book was an invention and an insult to scholarship, not only secure another job (albeit an adjunct slot at some provincial Connecticut campus) but also get another book out ? While, it is pedantic to point out, the best minds of this generation are [destroyed by madness, starving hysterical naked] out there serving fries while endlessly being not publishe
1 comment
Read more

May 10, 2010
Exploring musical culture and contemporary music making in Mongolia is going to be really fascinating and significantly more diverse than the just a search for traditional music making, that much is clear. Check out this trailer for a forthcoming documentary about Mongolian hiphop called Mongolian Bling . I really can't wait to see the rest of the film and, hopefully, to catch some of these musicians and bands live. The film is worth it if only for the quote above and interview (briefly excerpted in the clip). Perfect! There were quite a few of the hybrid hip hop-traditional bands (such as appear towards the end of the clip) in Korea, way more interesting stuff and unexpected to study than just the hiphop performers playing purely in the style, at least to my mind. My feeling watching this is something like that I had when I initially sought out "traditional" Mexican musicians migrating to North Carolina and Virginia and kept running into people who were everythin
1 comment
Read more
More posts