Showing posts from March, 2013
Show all

"they did what their training dictated that they do.”

March 22, 2013
Following up on the earlier discussion about the regularly invoked power of the state to kill its citizens without restriction and without even having to use pilotless drones, we have this truly tragic and clearly avoidable situation where a man named Robert Ethan Saylor, who had Down Syndrome, was killed by police in a movie theatre in Frederick County, Maryland for no meaningful reason. and with no repercussions for the police.   Apparently Mr. Saylor did not respond immediately or adequately to the request of the police, and for this he was restrained in such a way that he died.   It seems like unintentional murder, or manslaughter, at least. But police officers who were not charged by a grand jury. "Saylor was known for his hugs and was so fascinated with the police that he would sometimes call 911 just to ask a question. In January, he and an aide watched “Zero Dark Thirty” at a Frederick movie theater. As soon as it ended, Saylor wanted to watch it again and wo
Post a Comment
Read more
March 20, 2013 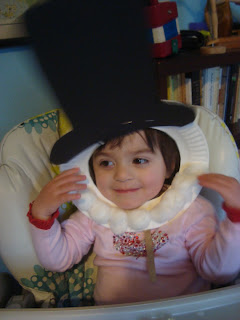 I've been promising pictures of the progeny for some time without following through, so here are a couple of recent pics from around here these days: Here is Miss Aura with the Lincoln costume she created: The Little Buddha playing traditional Hawaiian songs of her own creation: Two smiling ladies of the Ochsner-Margolies variety:      Going for a ride in the backyard: The Dismal Swamp beeyard as it looks this week:
Post a Comment
Read more
March 13, 2013
Surely one of the worst results of the sequestered budget is the early closing of the National Archives.  It used to be that the Archives were open until 9 W-F, which meant it was entirely possibly to get a nice 44 hours in the archives in only a few days, W-saturday. Now the building is going to be open only until 5 except for one week a month .  And they are going to do fewer record pulls each day overall.  Since you have to wait for materials under the best of circumstances, everything is going to be slower. This is truly terrible news all around. The late hours made it very easy to go to DC for a long weekend and get an enormous amount accomplished with some good 12 hour days. Now it will take more time and cost more as a result.  (Though it will mean more time to eat chapulines tacos, which I like to get at a restaurant right near Archives I in DC. At Archives II in College Park, I prefer to go get Korean food) The article says only 17% of users stay until 9. I can't imagine
Post a Comment
Read more
March 12, 2013
Glenn Greenwald is at his caustic and incisive best on the hypocrisies and fallacies of the liberal defense of Obama's drone policy and the attempt to smear Rand Paul as just a paranoid nut of the black helicopter variety.  I'd love to quote the whole thing, but it is a typically lengthy post, so go read it here.  Here is just a sample: "The primary means of mocking Paul's concerns was to deride the notion that Obama is about to unleash drone attacks and death squads on US soil aimed at Americans. But nobody, including Paul, suggested that was the case. To focus on that attack is an absurd strawman, a deliberate distraction from the real issues, a total irrelevancy. That's true for two primary reasons. First, the reason this question matters so much - can the President target US citizens for assassination without due process on US soil? - is because it demonstrates just how radical the Obama administration's theories of executive power are. Once you embrace
Post a Comment
Read more
March 08, 2013
Today in 1922 the great conjunto accordionist Juan Lopez was born in Jackson County, Texas. He was known as " El Rey de la Redova". And it was true, he could play redovas like few others . Fast, articulate, and powerful, he has always been one of my favorite accordionists. He played very traditional style, very fast, and in forms that have fallen out of common nowadays. Through a weird quirk of fate, I came across Juan Lopez's recordings almost exactly 20 years ago and it was his early work with Ideal Records that first introduced me to conjunto music. I was lucky enough to hear the best stuff first! Since conjunto has become a central focus of my listening, music making, and scholarly research, I feel a great debt to El Rey. Interesting fact: Juan Lopez had 16 children and 49 grandchildren when he died in 2008. When I was in San Antonio just recently I was fortunate to meet Felipe Perez, who played bajo with Juan Lopez while growing up and learned his specific st
Post a Comment
Read more

"It's for community safety."

March 08, 2013
I happy there has been an intense discussion on the use of drones. I personally believe this kind of extraterritorial and extrajudicial killing is the central political issue of our time, not to mention a profound moral issue that we can ill afford to ignore.  It is almost certainly going to become a key aspect of our projection of force abroad, and therefore a key aspect of American imperial governance that requires observation and critique (yup, and oppostition if not resistance). I know as a historian that this breed of unilateralism is nothing new. We were in fact engaging in wide array of extraordinarily similar extraterritorial and extrajudicial killings in the latter half of the 19th century as a matter of foreign policy (as well as extraterritorial abductions and other extralegal acts) with much less sophisticated technology.  Let me say self-aggrandizingly: If you don't have time to read the book I wrote about these topics , try out this reasonably short article  I wr
Post a Comment
Read more
More posts