Showing posts from February, 2012
Show all
February 11, 2012
This article by William K. Black on the complete failure of the Obama administration to punish those responsible for the financial fraud that led to the collapse of the housing market is essential reading. The contrast with the 1987 savings and loan crisis is even more damning. "The Obama administration’s record of prosecuting elite financial frauds is worse than the Bush administration’s record, which is a very large statement. This fact is demonstrated by a November report by Syracuse University’s Transitional Records Access Clearinghouse (TRAC), “Criminal Prosecutions for Financial Institution Fraud Continue to Fall.” The truth is that neither administration has prosecuted any elite CEO for the epidemic of mortgage fraud that drove the ongoing crisis, in contrast to over 1,000 elite felony convictions arising from the Saving & Loan debacle in the 1980s. Yet today's ongoing crisis caused losses more than 70 times greater than the S&L debacle, and the amount of eli
Post a Comment
Read more
February 11, 2012
I thought Paul Krugman's critique of the Charles Murray book was dead on. Krguman sees an attempt of the right to switch the debate from economics, which have essentially gutted the prospects of the working class, to a fictional crisis of morality, and then to shift blame for the decline of morality on liberals, the Sixties, and the host of usual suspects. I am interested to see how the Murray attempt to change the terms of debate plays out in this political year. First the Tea Party discovered an intense love of limited government and fiscal conservatism which had, astoundingly, somehow remained dormant during the profligate Bush years. For a time, the cultural war was eclipsed by the Tea party's clothing of a kernel of race war against what they believed Obama represented within the rethoric of orginalism. Sure, there was still the Palinesque language of "real America" but it was linked much more to questions of government power more than to critiques of moral
Post a Comment
Read more
February 09, 2012 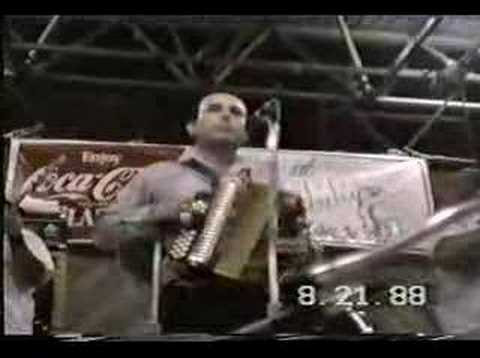 I was speaking with my night students about the sad passing of Angel Flores, a great conjunto accordionist. Since my guess is that not many of them ran to look up old footage of him playing, I am putting some here:
Post a Comment
Read more
February 09, 2012
Suffolk is weighing whether to pass a law in the schools to prevent students from wearing clothes ""that [are] not in keeping with a student's gender" "Board Vice Chairwoman Thelma Hinton, who initiated the dress code discussion, said Wednesday that she's pleased with the superintendent's proposal. "You can be whatever you want to be," she said, "but as long as I'm on the board, I'm about safety." Hinton mentioned reports from last summer that boys who wore feminine clothing had to use a faculty restroom because they felt threatened by their peers. She doesn't know the motivation behind their dress, " but when it becomes a safety issue, how far do you go with freedom of expression?" " Right, let's not get carried with this "freedom of expression" foolishness in the schools, what good could that possibly do? Oh yes, safety is paramont. No state understands this better than freedom-embra
Post a Comment
Read more
February 02, 2012
We had such a warm winter that whales are congregating off Virginia Beach .
Post a Comment
Read more
February 01, 2012
Good news from Texas is that Cristina Ballí is the new executive director of Texas Folklife . She used to be the head of the Narciso Martinez Cultural Arts Center in San Benito, among other positions, so this is a positive sign that there will be a strong advocate for conjunto in the organization. Kind of amazingly, this is the first director who is fluent in Spanish. Over at the Reyes Forum , which is the central discussion board about Conjunto music, one of the main members welcomed her and then immediately asked "Now that you are the director please try to get a soundman that has experience with the genre of Tejano/Conjunto because last year [at the Big Squeeze accordion contest in Austin] many of the students and artist were having major issues with the sound." It will be nice that someone who gets it is now in charge.
Post a Comment
Read more
February 01, 2012
One of the bright spots in Hampton Roads, if not in the universe, is Grand Mart , a large and lovable grocery store which sells half Korean and half Latino, largely Mexican, food. The store here opened right when we came back here from Korea, right next to the college in fact. I felt like it was a moment of destiny since I was really in despair about good food options. Though there is a little Vietnamese run store on Virginia Beach Blvd which has a decent selection. Grand Mart is a Korean chain, I know there is one in Alexandria also, and I think it was probably the same Grand Mart we shopped at in Sinchon, but perhaps not. Anyway, it is a source of true happiness in life. If you need to get fresh nopales and octopus in one stop this is the place. The sheer variety of vegetables is astonishing, and even more so in this area where large stretches of Norfolk are food deserts and where the grocery stores that do exist seem to be filled with a lot of stuff that is not exactly food--
Post a Comment
Read more
More posts