Showing posts from May, 2011
Show all
May 07, 2011
a friend of mine now in his second year of keeping bees, and in the process of starting to make splits of the hives he overwintered, writes "I'm sure at least one of them will die this winter after eating another 100lbs of sugar. By the way, do bees actually make surplus honey or is that a rumor made up by the National Association of Cane Sugar growers?" Of course he is really just headed down the path of exponential growth, as most all beekeepers do to within a couple of years. I was up to 30 hives for a time (considered "sideliner" status) but have dropped back to a comfortable 15. Though I did split some hives this week and made three new ones. I truly like that people I have have introduced to beekeeping have become obsessed. And really good beekeepers, too. One created a new beekeepers organization of a hundred plus people. An old friend of mine now has 40+ hives in SC and has swept the state fair prizes with honey and wax entries for the past few ye
Post a Comment
Read more
May 07, 2011
I was an instructor at Madison Area Technical College before and, for a semester, after getting my doctorate. I never experienced any discrimination, but this history instructor did, and he just got $1.1 million for getting terminated after complaining . Note to administrators who favor retaliation: Like, uh, firing people making discrimination claims who also happen to be educated and motivated enough to get a PhD but strapped enough to be teaching at a school like MATC-- not a good idea unless you plan to go to court. Especially in Wisconsin. Or at least, in pre-Walker-ite Wisconsin, who knows where things are headed nowadays. I may not have been discriminated against at MATC, but like all highly exploited adjuncts, I was paid such a tiny amount of money per huge class that is appalling to recall: $1500 per semester class. That was only a bit more than a TA at UW got per month, but without the benefits. And at MATC. For some reason I used to think that it mattered. All at
Post a Comment
Read more
May 05, 2011
I was really struck by the choice of "Geronimo" as the code name for the operation to kill Osama bin Laden, and so I wrote a short piece called " Geronimo, Bin Laden, and U.S. Foreign Policy ", which is now up on the History News Network . Let me know what you think! Another article on understanding bin Laden's death in the broader context of U.S. foreign policy, " Osama bin Laden is gone, but US war in the Middle East is here to stay " by the always insightful Andrew Bacevich is worth reading too.
Post a Comment
Read more
May 04, 2011 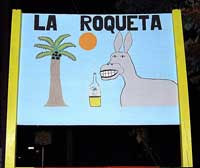 I've been working on a project documenting the visual and musical impacts of Latino (mostly Mexican) migration to the Southeast, and now my photographic collection called " Latinization of Southern Space and Place " is online, hosted by the University of Richmond. Go check it out . I really like how the page was designed by Nathan Altice, it makes a huge difference to have a functional and dynamic webpage. This is one of my favorite images, from Winston-Salem Though this is probably my favorite
Post a Comment
Read more
May 04, 2011
None of my students seemed to want to talk about anything related to the bin Laden capture other than the possibility that it hadn't actually happened. There was animated discussion about the likelihood of lies in this killing, but not much else. Why is that? This made me start thinking about the unusual prominence of conspiracy theories in the news overall, which seems to have accelerated recently. These theories have always existed, of course, but it strikes me that the way they are discussed in the forefront of the news is something new. So we have newspapers reporting on the idea of releasing bin Laden death photos while discussing how this might quell the voices of those spinning conspiracies. If nothing else, this shows the centrality of conspirators in shaping current politics. But why should we take conspiracy theorists seriously rather than just ignoring them? Why thrust them into the conversation of reasonable people? It is a constant requirement now for governme
Post a Comment
Read more
May 02, 2011
It is hard to sort out exactly how to respond to the killing of Osama bin Laden. That is an understatement. I do believe it is a positive thing that this mass murderer is dead, and I am as impressed as anyone by the raid (and looking forward to Mark Bowden's book on the subject). But to have a real coherent, official "response" yet, no way. Remember the Onion headline after 9-11 "HOLY FUCKING SHIT". That perfectly captured that uncapturable moment. But this moment is orders of magnitude less and besides relief this chapter is over, what it ultimately means is less than clear. When I heard last night my response was, appropriately, "whoah." And certainly I don't have the immediately visceral response of any coherence. I have not been consumed with the relief, glee, or blood thirst that seems to be the more typical response. Running like a fool into the streets chanting and singing is actually inconceivable, is it not? More than a bit to
Post a Comment
Read more
More posts