Showing posts from June, 2009
Show all
June 18, 2009
I'm a sucker for good (or at least, fun to page through) reference books, and maybe especially for field guides. Sometimes I feel like I have field guides to every damn thing on the planet, stationary, slithering, flying, whatever. But there are always others.

I've been really pleased, for instance, that next to the microfilm reader at the VWC Library there stands an unexpectedly beautiful book--Lichens of North America. Anytime I need a break from nineteenth century shenanigans, there it is. (Sure you can view it on google books, but you don't get the full impact). To actually learn the lichens awaits a new day.

Now a new book just came out about the Weeds of the South, and it is a masterpiece. Beautiful book with excellent images.

My students (and maybe my neighbors) will find the authors' definition of the South a bit broad (it includes the Ohio River Valley quite far north) but weeds don't follow invented regional distinctions, I guess. 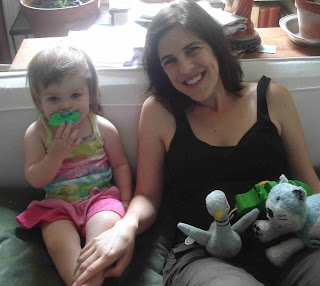 My blogging has been so light that it has been awhile since I reiterated Lark's dominance of the cutest toddler category.

A couple of pictures in the house...after realizing we hadn't taken a picture in the last five minutes...or something like that.

Lark sporting her new 'do, courtesy of yours truly:

Here lark was discovering the marvels of putting ice from a cooler on top of her head: 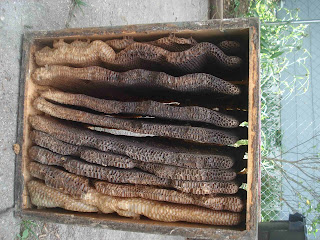 You may recall that one of the swarms at VWC had moved into two empty medium supers stacked up. The bees have moved up and out of these boxes into regular Langstroth hives, so I dismantled it. Here is what it looked like (bottom view).


It is actually pretty neat, in part because I put the regular boxes on top and they comb which was damaged when I pried it open initially was slowly aligned to the new frames.

Here are the two frames that were in the top box when the swarm moved in. You can see the comb they built underneath.

Here is the comb from the box. 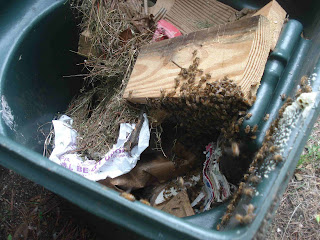 Beekeeping may be illegal in Norfolk, but the bees sure as hell don't know it. I just recently got another swarm call in Norfolk. Like the last one, this was close by too.

These bees had moved into a garbage can. I think they had been there for at least a couple of days since they built up some nice comb. I gave the comb, which was fresh, white and beautiful, to the lady who called me about the swarm, she is going to use it for furniture polish.

The bees were extremely gentle even though they might be considered a nascent hive rather than a full blown hive. I managed to find the queen and grabbed with a little queen-grabber device (that is the technical term), so the whole thing was a snap.

I used some other really technical tools to remove them--my swarm bucket of course, and then an empty Tecate box that was rolling around in my truck. Turns out the Tecate box was the perfect thing to get the bees out of the trashcan --2x4s and other stuff snarled together. The box was eas…
Post a Comment
Read more
June 15, 2009
If you have access to the Wiley-Blackwell Synergy database (or whatever name it has these days) you can read my article which finally just came out last week: "Latino Migrant Music and Identity in the Borderlands of the New South," Journal of American Culture 32:2 (June, 2009): 114-125.

I am not allowed to post a pdf of it (since Blackwell thinks that might interfere with the half dozen people or so in the world who might ever read it), but I definitely can email you a copy of it if you are interested...

I've been planning to continue study of the music at Mexican rodeos in NC and Virginia (I have already been to several, but there is always more of this rigirous research to be done), but work has been slow on that front since I have been holed up with the extraterritoriality book. And now I find that the next rodeo in Manassas isn't scheduled until Sept 13 (Noon-8, at the Prince William County Fairgrounds, in case you are making a schedule) and I'll be in Berke…
Post a Comment
Read more
June 15, 2009
Time has little meaning in the summer. That would be by way of explanation why I haven't posted in something like two weeks.

A sizable chunk of my absence from Nunal was due to the Mt. Airy Fiddler's convention, which is one of my favorite experiences of the year. Partly because I was gone at it--and partly because of a longish recovery curve upon returning back...

Though not the largest old time convention in the South, it surely is one of the best. Mt. Airy stands at the core of Surry County, which is the heart of a still-living tradition of old time music making that is unequaled anywhere else. (Notable enough that a friend of mine is writing a dissertation about it). It doesn't hurt that pioneer old time fiddler Benton Flippen is still around, and that Mt. Airy has the WPAQ radio station (Voice of the Blue Ridge) maintaining the flame.

At the fiddlers convention there is, of course, music day and night. I generally played until 4:30 or so each morning, and then went …
Post a Comment
Read more
More posts