Showing posts from December, 2009
Show all
December 16, 2009
if you have some time to kill, a book review I just wrote on Brian McAllister Linn's, The Echo of Battle: The Army's Way of War is now up at the Michigan War Studies Review .
1 comment
Read more

December 13, 2009
The news from Juárez only receives national attention when it is politically convenient or at an anniversary point (look for year end accountings of the murders) but the death rate there is nothing short of totally astonishing and appalling . Sixteen people were killed this weekend, 6 on Friday, 10 Saturday. There have been 123 murders in December so far and 2,487 murders this year. 123 murders in 12 days , yet unless you seek out this news in Mexican newspapers (or live in El Paso) there is total silence about it. This is clearly an insane and out of control crisis. And there is no question--the blood is on our hands. For all of the talk of expanding our commitment to the failed (or non-)state of Afghanistan it really is time to heighten the realities back in our neighborhood of the failed state we collectively as Americans are producing in Mexico. We might not be actually pulling the triggers but we are encouraging it every day we continue prohibition. Simple. And
1 comment
Read more

December 13, 2009
I sometimes wonder if anyone associated in a management capacity with a coal company is anything other than a venal, corrupt, and evil presence seeking to pollute, cheat, rape, and otherwise destroy the environment and the health and safety of local communities. I haven't seen any evidence to the contrary. But there is a whole lot of evidence that they will lie and cheat even in the face of known dangers to health, all to make a buck. Here is a recent example--the just-released evidence to show that Dominion Virginia Power executives knew that fly ash was not "as safe as dirt" as they claimed when they used it to build a community in Chesapeake. Quite the opposite: "The executives anticipated public questions, and rehearsed and parsed their answers. They drew lines on what to share with regulators and what to hide. In one memo about preparing for a public hearing, a participant wrote, “Do not mention hazardous vs. drinking water. Just say 'completely non-h
Post a Comment
Read more
December 13, 2009
Up in Richmond last evening I enjoyed talking to a couple people with the kind of mindset you really only find in the South--conservative libertarian, committed to the outdoors, and yet also socially conscious supporters of urban renewal in the so-called progressive stripe. That is, committed social activists who are also engaged with a full range of understanding of social and economic complexities and not simply armed with certainties. Displaying the kind of social commitment minus self righteousness which is a good model for others to adopt but which is depressingly rare in the "progressive" community and totally absent in the faux-populist reactionary of the Sarah Palin-supporting type mouthing meaningless platitudes about the virtues of the common man. To be truthful, the political spectrum fails in the face of the urban problems in American and especially in the South, so endemic and so intense in Richmond, Petersburg, Norfolk, and Portsmouth, to name a few communiti
Post a Comment
Read more
December 11, 2009 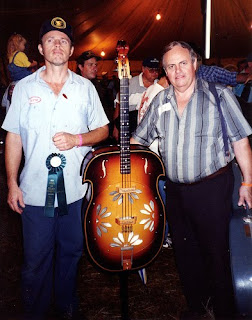 Longtime Nunal readers will recognize Wayne Willis' low bro in this picture. Turns out an ethnomusicologist in Ohio has it posted on his page , along with some other interesting photos.
Post a Comment
Read more
December 11, 2009
Looking up some old articles in the Forum , I happened on this article called "Russian Jews as Desirable Immigrants" from 1893 (and very much of its time) which is interesting for any number of reasons, not least the emphasis on the radicalism and social orientation of the immigrants. According to the author description Van Etten spoke "the German-Jewish dialect) and was an organizer of the Woman Cloak-maker's Union. "The Russian Jews are naturally radicals on all social questions. They have come from a country which represents to them only tyranny and oppression, and social questions have a deep, absorbing, and personal interest to them. Another fact that increases the radicalism of the educated Jews is that, not being an abiding people, they have no strong prejudices in favor of any established party. Thus from the force of circumstances as well as by natural inclination they find their natural and congenial place among the ultra-radical workingmen. Thousan
Post a Comment
Read more
December 11, 2009
I haven't actually expired but since some people have asked I thought it would be good to note that here. You'd never know it by the neglect here at Nunal, but so it goes But I have to say though that there has been an inverse relationship to the amount of pages I have written and the number of blog posts I have not put here. The end is in sight. It is a beautiful sight. But it is too bad since I can't really go backward because I will never adequately capture the events of the past month or so. I have had a whirlwind of adventures though since last we spoke, to Louisiana twice, Mexico City once, and Florida too just to round out my semi-circumnavigation of the Gulf of Mexico. Having gone to the Society of Ethnomusicologists conference in the D.F. I have to say that ethnomusicology is a superior field in most respects. The good papers on interesting topics (there were of course plenty others of less interest) stand among the most thoughtful and interesting work be
Post a Comment
Read more
More posts