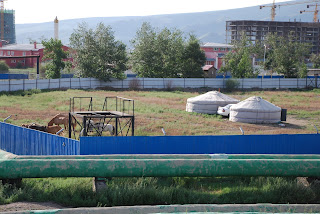 Hard to believe how fast three weeks went by. I'm heading to Beijing today and though I am definitely looking forward to that I am sad to be leaving Mongolia. I actually feel like I've spent an appropriate amount of time in Ulaanbaatar but have an equally strong feeling that I need to get out to Hovd next time I come back, which will hopefully be soon. Much more to do and learn with the music, of course, and I have a far better sense of what I am interested in studying after just a few weeks, especially among the younger players in what are generally called "folk ethnic bands".

I also really want to get to the Gobi. I met some American parisitologists who worked there for a month (30 kilometers from the closest water!) and it sounds like something I really need to see.

I don't have the time now to do a thoughtful retrospect at the moment because time is short, but figured I throw up a few more pictures. And anyway, I am sure the visuals are more interesting …
Post a Comment
Read more
July 22, 2010 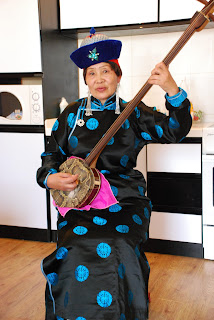 I can't get any of my videos to load, but I am using some seriously creaky technology that I am using illictly from a hotel I just walked in, so I can't really complain too much.

But I can get some pictures up, here are some I said I'd post, one of Otgunjav playing in full regalia in my kitchen

and the other of Jontsan playing the very obscure shuur, which kind of says it all since you can see his mohawk. Actually what captures at least one slice of life in modern Mongolia the video I have of him on another day wearing a Cleveland Indians shirt, a mohawk, and throat singing.

There is a three day Buyrat festival going on at the Culture Palace right across from my apartment, so there are hundreds of Buyrats wandering around in very elaborate deels and the distinctive Buyrat pointed hat, and, better yet, there is a two day long Buyrat singing contest. This was definitely for Buyrats only, the announcing was all in Buyrat, and there were no tourists there. Buyrats are from nor…
Post a Comment
Read more 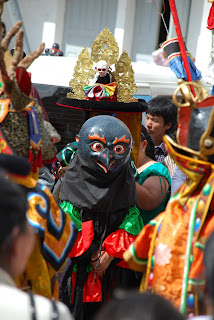 Turns out today there was a Buddhist Tsam ceremony at the Doscoilin Monastery, which is just a stones throw from the ACMS.

Tsam is an extremely elaborate masked dance to exorcise evil spirits. The monks at the monastery handed me a sheet that called it a "ceremonial secret tantric meditation, which is called the science of 'circle dance' or 'cam', belonging to the category of the ten great and small sciences."

Tsam almost totally disappeared from Mongolia because of communist suppression, and so it is very rare even today. This is the only one held in Ulaanbaatar that is a 'real' for Buddhist not a show one for tourists.

There are a lot of tourist Tsam around, I have seen a bunch. The museums here are also filled with some really beautiful old masks. The show tsams are usally presented along with the array of Mongolian traditional arts: long song, khoomei (throat singing), morin khuur, contortionists, and other traditional dances and some of them …
Post a Comment
Read more
July 17, 2010
The last few days have been good enough that they alone would have made this trip to Mongolia worth it.

Not only have I met, interviewed, and recorded a bunch of astoundingly talented musicians and throat singers, I've had some a chance to play tunes with some one of them for many hours until near dawn, time at which of course music sounds best.

Oh, and swapped my banjo for a morin khuur too, fulfilling some critical corner of my destiny and, more so, the destiny of the banjo in Mongolia. What unleashing the banjo here means is hard to guess, but it isn't too hard to envision a Chingiss style reconquest of most of the world's surface, no?

The banjo is now in the hands of a guy named Jontsan, one of the throat singers from this band:


I didn't film that, this band has a bunch of stuff on youtube including some pretty over the top music videos.

They play every night, which is a grueling schedule. They are very good, playing a Tuvan sounding style of western Mongolian m…
Post a Comment
Read more
July 14, 2010 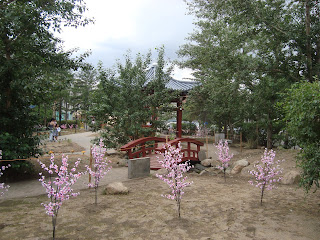 Something of a technological apocalypse here, as last night I finished writing a very long post on my experience of Nadaam and over the past week, and prepared to load some video on the post of playing, singing and other noisemaking during the festival when something about doing that simple act made my laptop crash.

Now it won't do anything but give me a blue screen, or what geeks call the blue screen of death. Several hours of trying again didn't work. Cursing seemed to have little effect either.

Blue is an auspicious color in Mongolia, and I've always been partial to blue, so I won't call it the blue screen of death, but it definitely seems to signal the end of things for my laptop, which is kaput. It is under warranty but fat lot that is going to help here in Mongolia.

This is going to put a serious crimp in posting to Nunal, to say the very least.

I had some things to send off today, so I walked back to the hotel where I stayed the first night, looked like I kne…
Post a Comment
Read more
July 14, 2010
I've been relatively too busy to post here for the last week, or at least not taking the time to do it given all there is to do and my short time here.

And then too a couple of days laid up and barely able to move from the bed didn't help things either. Hard to know what was the cause, could have been my over-exuberant consumption of Nadaam hushuur, which is a fried dough pie filled with mutton (or, deliciously, filled with kimchi and meat in special moments). Hard to imagine that it was that, since presumedly frying would kill it all. So some other exotic bug I picked up.

Of which there are many here, no doubt. Just yesterday I stepped outside and saw a man crapping behind the building next to my building. Before disappearing into the sewer. Yup, he crawled OUT of the sewer to crap here on the green earth and then deep beneath. So maybe it was areosolized fecal matter that did me in, I don't know. I don't want to know, actually, now that I am feeling a bit bett…
Post a Comment
Read more
July 07, 2010 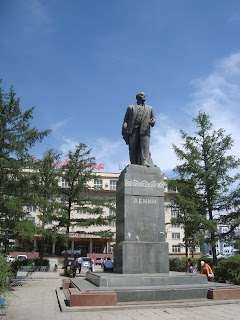 I walked by this statue of Lenin yesterday morning.


Over the next six hours I heard two different stories of prostitution in the shadow of Lenin, (one a hilarious story of a Finnish tattoo artist who was mugged while picking up a Russian prostitute which is a bit elaborate for me to recap here) and a third person tell me the punchline : "Lenin was put there to watch over the prostitutes."

I had some time to kill before meeting with some musicians so I went to the Choijin Lama temple, which is really in the heart of the city. It is one of the few that was destroyed by the communists, in aprt because it was already a museum at the time. Quite a beautiful spot. The wall in front was built to keep out the evils of the Manchus coming up from the South.


The inside of the temple is filled with some seriously terrifying Buddhist imagery, including a ceiling of flayed bodies and decapitated heads, and some silk tapestries of the same. 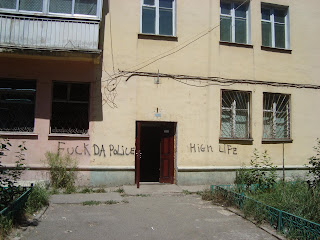 a couple of other shots I took today after walking away from the Zanazabar: 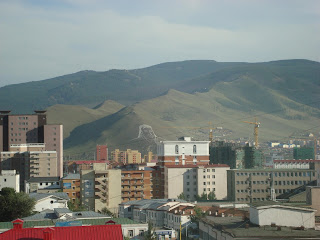 Now I am well ensconced in some UB luxury so I have a chance to post on Nunal.

Kind of unexpectedly and maybe even unfairly ensconced, I must say. Lap of luxury. The ACMS set me up with a brand new apartment belonging to one of the ACMS staff's friends, who just got the place and hasn't even moved in yet! It is a really nice place with all new and modern stuff, nice kitchen, and even high speed internet. Though there is no shortage of internet cafes around here, they seem to be at least on every block, many of them free wireless.

I was expecting something quite a bit less polished so this was a nice surprise.

This apartment is on the 10th floor right next to the Central Sport Palace (ther owner is a judo coach at the center) and very near the ACMS office and the National University of Mongolia, and about a five minute walk to Suhbaatar Sqaure. Perfect location, in other words. The view out the living room window is of the mountains south of the city, with a nice view of t…
Post a Comment
Read more
July 04, 2010
I am in Mongolia after 25.5 hours travel time from Washington DC, all of which was remarkably easy actually if you leave aside the 25.5 hours part of it. On the flight to Beijing I ended up sitting next to a musicologist on her way to a Fulbright year in Beijing, so the conversation was very interesting coming over.

Arriving in UB was pretty easy. Amazingly dark flight over the country until you reach the city. It definitely helps when someone picks you up here, which took the only potentially stressful part out of the trip I think. Flights into Ulaanbaatar land at near midnight so I did kind of wonder how it was all going to work. I drove through the city but it is pretty dark and I couldn't see much. I am staying at a Communist era hotel which has all of the charms of a Communist era hotel but it is clean and cheap and right in the city center, and has free internet.

I had six hours in the Beijing airport, which is appropriately massive and cool, with a nice green roof that …
Post a Comment
Read more
More posts