Showing posts from December, 2008
Show all

The Big Lie of Clean Coal

December 24, 2008
It was only a matter of time before there was another disaster, and just in time for Christmas we see the terrible results of coal burning further polluting the waters of the southeast. "A wall holding back 80 acres of sludge from a coal plant in central Tennessee broke this week, spilling more than 500 million gallons of waste into the surrounding area. The sludge, a byproduct of ash from coal combustion, was contained at a retention site at the Tennessee Valley Authority's power plant in Kingston, about 40 miles east of Knoxville, agency officials said. The retention wall breached early Monday, sending the sludge downhill and damaging 15 homes. All the residents were evacuated, and three homes were deemed uninhabitable, a TVA spokesman told CNN. The plant sits on a tributary of the Tennessee River called the Clinch River. "We deeply regret that a retention wall for ash containment at our Kingston Fossil Plant failed, resulting in an ash slide and damage to nearby h
Post a Comment
Read more 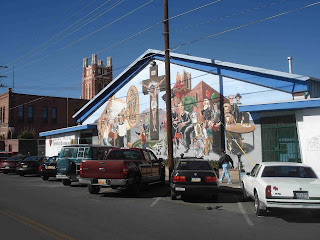 My experience in El Paso was both very favorable and very productive for my research, so I definitely can't complain. That town has a very distinctive feel, which is just another reminder of the vastness and diversity of the U.S. and which makes the whole country so damn interesting. El Paso also feels a lot different from South Texas, which figures since it is 550 miles to San Antonio, for example, and I think it is different than other places I've been in the southwest. The look of the city, the feeling on its streets, the overall vibe in the places I visited all make for an interesting experience. Lots of good murals, too, it is a visually interesting city despite the generally dusty and or rundown vibe in large parts of it. Some nice vistas when you get up in the mountains too. The Sacred Heart Tortilleria You could call this "the obligatory Virgin of the Guadalupe picture", but it is worth noting that this is on the side of the House of Pizza. I n
Post a Comment
Read more
December 16, 2008
I often suggest to people that they give money to the Heifer foundation, which supplies animals to people in the third world. I like this organization a lot, especially since they supply people with a hive of bees for a thirty dollar donation. Since that is less than half what a package of bees costs here (forgetting even about the cost of the equipment) this seemed like a hell of a deal. So I was surprised to see that this charity spends its money in unwise ways. For example, the president Jo Luck earns $236,881. How is that a justifiable amount of money for a charity to pay someone, even one that raises a large amount of money? Especially one headquartered in Little Rock, Arkansas? Even if a case could be made, I just keep thinking that that is 7,800 hives worth of annual compensation. I checked some other charities I support. I got all of these figures from an useful website called Charity Navigator . Appalachian Voices, an organization in Boone, NC that fights mountaint
Post a Comment
Read more
December 16, 2008 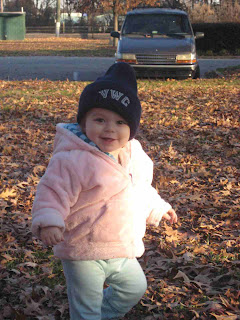 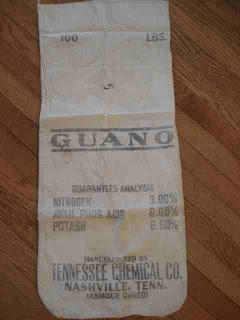 One the students in my Virginia class was describing African American students in 19th century Virginia who had to wrap their feet in guano bags to keep warm in the winter. Nobody knew what these were, and it launched a discussion of the meaning of 'guano' in VA and the South more broadly. No, it isn't too hard to get me talking about guano...the short answer is that "guano" became the universal term for fertilizer long after it was actually real guano. I never ended up bringing a guano bag into class before the semester ended, so as promised I am posting a picture of one. This is from Tennessee, a 100 pound guano sack. It looks small in the picture, but it is almost three feet long.
Post a Comment
Read more
December 05, 2008
The regular, casual, and frightening violence around Norfolk is so common that we don't always even note it, though the newspaper almost daily details child deaths , drug murders, random shootings , non-random shootings , shootings of missionaries , armed bank robberies , robbery +abductions car jackings, ex-cops charged with child rape , muggings, knifings , assaults , and other reminders of life here in the 757 (not to mention rampant property crimes and even the digging up of a Civil War grave for relics ). The sheer amount of bank robberies is something I can't believe-it is almost every day. Here was a shooting yesterday about a half mile from my house and about four blocks from an elementary school (and polling place). But sometimes certain horrifying events do warrant particular attention. Right before we left for Korea there was a mob killing of a navy man in Ocean View, led by three young teenage girls. They have just come to trial now , one of them just pleaded
Post a Comment
Read more
December 04, 2008 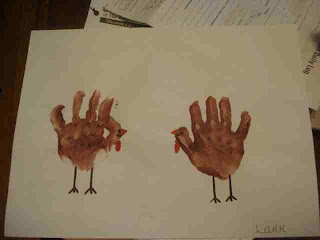 I am starting to have a whole new appreciation for the Columbian Exchange with a daughter in daycare--every week some exotic new virus sweeps through the house and lays us all out. Since before Thanksgiving I have been nailed by some bug that has totally floored me and made me sleep upwards of 15 hours a day. This combined with the always-hectic last week of classes has been mighty rough. Suffice to say, blogging has not been in the works. ...which means I haven't yet had the chance to post a picture of a real milestone-- Lark's first hand turkey:
Post a Comment
Read more
More posts