Showing posts from May, 2009
Show all

May 29, 2009
"Former GOP congressman Tom Tancredo (Colo.) also took Sotomayor to task for membership in the National Council of La Raza, labeling the nation's largest Hispanic advocacy group as "a Latino KKK without the hoods or nooses."' Meanwhile, bloviating fool Rush Limbaugh compared her to David Duke...
Post a Comment
Read more
May 29, 2009
I can't really figure out why we are supposed to be saddened by the decline and deaths of local newspapers. These papers are terrible and I think their disappearance is going to have every little overall impact. Whatever small contribution they make could be done much better online. This is not necessarily the case with the major newspapers also in crisis at the moment. The disappearance of these papers will have a very real, even drastic impact on our political life. But even in this case, much can be done by the new media. Small papers like the Virginian-Pilot that once were decent little papers with a purpose are now nothing more than a waste of paper and ink. Most of these papers have been owned by huge media corporations which have eliminated any distinctiveness or independence (the Courier-Journal comes to mind). They have been "local" only in the vaguest sense for years, even decades, and are instead just AP stories embedded in large furniture store and h
Post a Comment
Read more

how it should be done

May 29, 2009
For all the growing optimism that we may be pulling out of the downturn, there has been appallingly little discussion of the fundamental rot at the heart of our economic (and, let's be honest, moral) system built upon debt and consumer spending...and debt, debt, and then some more debt. This optimism is based on growing credit (also called "debt") and consumer spending, while the savings rate is zero or below zero. The obvious truth is that we can't forever borrow money and spend it without one day paying the (Chinese) piper, but nobody is willing to push for change in other directions. Meanwhile, things are much different in Asia where they, like, you know, build things and export them. And where the rich save their money in banks , of all places. The wealthy in Korea spend a lot too, but if you are saving 31% of your income that seems ok. "Korea’s wealthy save more money and spend less than their peers in other Asian countries, according to a recent co
1 comment
Read more
May 29, 2009
Several people have asked me what I think about the situation in Korea (i.e. the posturing by North Korea) though, it is worth noting, I have no particular expertise in North-South relations. But my sense from reading those that do is that this is not a crisis but instead the theatrical periodic demand of the North to be taken seriously and to have attention. respect, and possibly funds focused on it. I am persuaded that North Korea acts rationally, though I think it does indeed represent a danger not just to Asian peace but especially in terms of global weapons proliferation. So far everybody is playing their scripted part--the sabre rattling of the North is met with enhanced levels of readiness, stern words from ROK and American leaders, reaffirmed support for ROK and Japanese security, further apocalyptic threats from the North. Obama, not dramatic by nature and not stupid and rigid like Bush, is unlikely to feed the issue (one good sign is that John Bolton is warning of doom, s
Post a Comment
Read more
May 27, 2009
In what must be some kind of record, the goldfish are already dead.
Post a Comment
Read more
May 27, 2009
This is a worthwhile piece about post-apocalyptic (specifically post-nuclear) novels. It links up Mccarthy's The Road with some recent, lesser, mass-paperback post-nuke books. The piece is both funny and thoughtful (Ron Rosenbaum calls them "nuke-porn" books), and free of the usual snark that tends to hollow out pieces in Slate. His consideration of McCarthy's book is worthwhile. Rosenbaum would, of course, have no way of knowing that I had discussed the current context of The Road much the same way he did when I gave a brief talk on it to our freshmen class last August... I think the Road stands as an important and striking book and the quality of its writing makes it stand out from most all the post-apocalyptic works. One aspect of its power is the starkness of the writing. And the lack of politics. McCarthy is not using the apocalypse to flog a current political point, and so little is indicated about the main character that he could, in fact, be any
Post a Comment
Read more
May 27, 2009 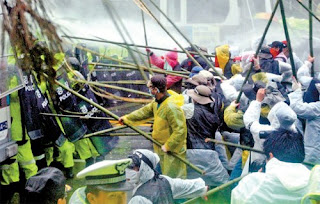 Americans don't get riled up to protest. Give away billions in taxpayer money to financial fatcats with no accountability--no worries. Refuse to punish war criminal torturers--no problem. The battle cry is...moo. Koreans, on the other hand, live in a vibrant democracy and their political action is a bit more direct. Here is a striking photo of union protesters in Daejeon using sharpened bamboo spears to attack riot police. (an article about the current state of rioting in Korea, quoting a Sogang professor, is here )
3 comments
Read more
May 27, 2009 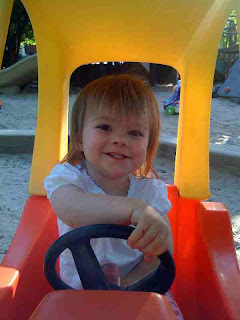 Lark has been into fish recently, so I went to buy her some goldfish. In typical fashion, this little project has ended up being both more complicated and more expensive than any reasonable person would anticipate. The goldfish themselves cost a quarter each. The filter was something like 1000 times more expensive, and ended up being powerful enough to whip these poor little bastards around the fishbowl so thoroughly as to be useless. One solution was simply to keep replacing the two-bit fish, but I chose the more humane idea of using a larger tank. As you might I expect, I have a fish tank sitting patiently in the garage for exactly this purpose. I used to keep Hector the giant Central American millipede in it, until he expired and I put him in the freezer awaiting future rebirth when science advances to the point to do so. So now there are two little goldfish in an unnecessarily huge tank. They are supposed to be able to live for 20 years. I give them a couple of weeks, tops
Post a Comment
Read more
May 27, 2009 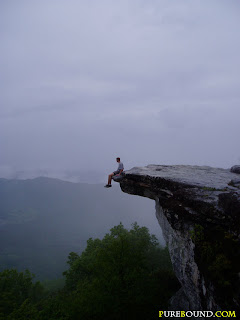 I am just back Monday evening from my annual section on the Appalachian Trail. We did 76 miles, which is a bit shorter than our hoped-for 100 mile yearly mileage. I am no more ravaged than usual. The trail is grueling, but I've learned my lessons over the years and do some amount of training yearround and so can walk without pain today, which has not always been the case when I've completed a section. It helps that Virginia has more forgiving trail than North Carolina (extremely hard) and North Georgia (brutal). I've been hiking the AT with a friend of mine (also a historian, in South Carolina) for 10 years this summer. We've made it up from Springer Mountain in Georgia to the northern reaches of the Shenandoah National Park. It would have been nice to get half way at the end of a decade(Harper's Ferry is considered the traditional halfway point though I think it is not fully half way) but that will not be the case. But I'd still like to finish by age
1 comment
Read more

Things for which there should be German words

May 27, 2009
I haven't posted in almost a month because I have been basically traveling nonstop since the semester ended and haven't really had time to sit down with Nunal. Cataloging my travels can't possibly be of interest, but having spent 10 days in South Texas I can confirm that this remains a bright spot on my personal map. A few days in Florida confirms the opposite. I also spent some time in the superb libraries at the University of Texas at Austin, so the Yin of conjunto music and barbacoa tacos in San Antonio was balanced with the Yang of the Benson Latin American Collection library. I left town with a feeling that was extremely hard to capture--that powerful sense of anticipation and relief (cresting as the semester came to a close) that I have an upcoming sabbatical that begins the instant the semester ends. I was thinking there likely is a 21-letter German word that captures this ineffable feeling--if you know what it is, let me know. I am told there is already a En
Post a Comment
Read more

May 05, 2009
I've been thinking about the astounding Kentucky Derby results and wondering if any one is going to write a song about the winning horse, Mine That Bird. There are a couple very relevant traditions of horse songs that should, in a perfect world, yield at least a few songs about this horse. Not least, there is that great Kentucky tradition typified by "Molly and Tenbrooks", which, of course, is the quintessential horse racing song based on an 1878 race at Louisville (before even there was a Churchill Downs). Even more importantly, this is one of the most historically significant bluegrass songs. It was one of Bill Monroe's favorite songs and it was the song that the Stanley Brothers first recorded in the style of music picking invented by Bill. To quote Richard D. Smith, who wrote an essential biography of Bill Monroe , that recording "proved that Bill's music had gone beyond being the sound of just one band. It was now a true, recognizable genre."
Post a Comment
Read more

At least they aren't harvesting their organs, yet 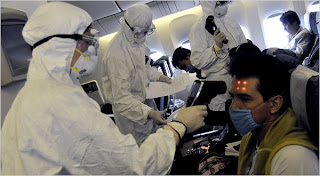 Geez, how thin skinned do you have to be to be offended by this sort of treatment given to passengers on Aeromexico flying into freedomland Singapore: The space age microfiber get-ups are cool, but the scanner is the winner And no wonder they are freaking out over there and quarantining people--this is a disease in which literally tens of people are really sick. China, predictably, is reacting with a combination of excess and speed: "Since Thursday, when an infected passenger from Mexico City arrived in Hong Kong, Chinese health officials have been rounding up his fellow passengers, as well as some Mexican travelers on other flights who showed no sign of illness. The man who arrived Thursday is the only confirmed case of swine flu in China . Among those the authorities have sequestered are a number of Mexican passport holders who had not been home in months, including a consular official in Guangzhou who was briefly held and tested after he returned to China from a trip t
Post a Comment
Read more
More posts