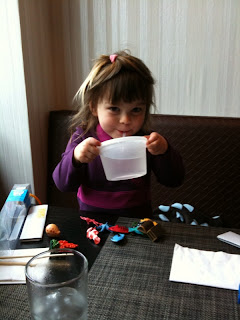 We got stuck in New York for a day traveling back. Here is Miss Lark looking impossibly but typically cute at a restaurant.
3 comments
Read more
April 27, 2010
Korean beekeepers have been having some problems , with 30% losses. This is approximately where the U.S. losses are each winter. This article indicates that they make much of their money from honey rather than pollination, which is exactly opposite the case here.
Post a Comment
Read more
April 23, 2010
This is a great point--here is hoping someone still actually reads Slate... "We're already sending our clean-energy tech to China, and intellectual property law has nothing to do with it." "Economic theory states that technology innovation comes from the private sector, and that when the states attempt to get involved they tend to "crowd out"—scare off, or out-compete—private firms, which are by definition more efficient than big, dumb governments. Government attempts at energy tech innovation are considered a joke. Exhibit A is the SynFuels coal-to-liquid fuels program of the 1970s, started in response to oil price shocks and widely viewed as a government boondoggle. Governments shouldn't pick technology winners and losers, say liberals and conservatives alike. It fails every time. But the actual economy has a funny way of undermining economic theory. Call it creative disruption. The financial crash of 2008 was created by Wall Street firms, not gove
1 comment
Read more

Mongolia is Calling Me

April 15, 2010
Words cannot accurately capture how thrilled I am to learn that I received a grant from the American Center for Mongolian Studies to go to Mongolia this summer to study Mongolian traditional music making and issues of intangible cultural heritage. Those of you who have known me for a while will know of my interest in Mongolian music, not just the throat singing but also the horse-headed fiddle as well (morin khuur). To have the opportunity to actually go there is so riveting I am truly having difficulty thinking about anything else. Incredible. When I first heard of the grant I looked at the page and there was a caption that read "Mongolia is calling you." Truer words have never been spoken.
1 comment
Read more
April 15, 2010 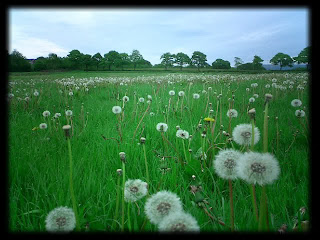 One of my colleagues at VWC is from New York, with an accent thick enough to cut glass. But I think the most telling New York characteristic was his truly endearing need to look up the yellow flowers that had popped up all over his new Virginia Beach lawn. Thanks to Google he managed to discover just what they were--dandelions. Apparently his neighbors were not thrilled they were marring the green expanse. Apparently they don't know you can eat every part of them. I was reminded of this earlier today when a guy stopped by the house and when I opened the door he said "I was wondering about your lawn." I looked at him, and at the lawn (which was grazing his knees), and amused myself by responding "what do you mean?" For some reason he thought I would want to have it cut. Nope, I prefer my gasless mower which pushes the grass over long enough for me to pretend it was cut, allowing it to spring healthily back in place, high enough to give small mammals a pl
Post a Comment
Read more

April 08, 2010
Now that McDonnell has reversed himself it is time to marvel how politically tone deaf he seems to be. The same trajectory of dumb move followed by retreat happened when he ended the anti-discrimination laws in state institutions particularly directed against gays, and then reversed himself as the AG goosestepped forward. This way he not only has totally lost any credibility with all Virginians not on the hard right, he also loses whatever favor he was hoping to curry with the far right. Bad politics, no matter how you slice it.
1 comment
Read more

Virginia is for lovers...of the Confederacy

April 07, 2010
Governor McDonnell may be a lot of things, but historically minded, classy, smart, or sensitive ain't among them. Choosing to officially recognize Confederate History Month, he also choose to adopt the silliest and most offensive interpretation of the meaning of the month. "The two previous Democratic governors had refused to issue the mostly symbolic proclamation honoring the soldiers who fought for the South in the Civil War. McDonnell (R) revived a practice started by Republican governor George Allen in 1997. McDonnell left out anti-slavery language that Allen's successor, James S. Gilmore III (R), had included in his proclamation. McDonnell said Tuesday that the move was designed to promote tourism in the state, which next year will mark the 150th anniversary of the start of the war. McDonnell said he did not include a reference to slavery because "there were any number of aspects to that conflict between the states. Obviously, it involved slavery. It involve
Post a Comment
Read more
April 07, 2010 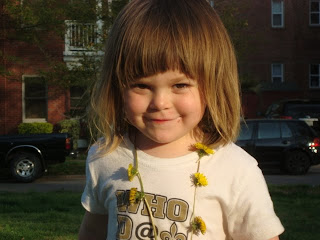 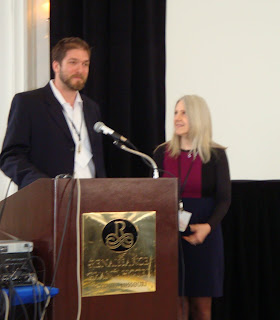 I was in St Louis over the weekend, at the Popular Culture/American Culture Association conference accepting the Carl Bode award for my article on Mexican musicians in the contemporary Southeast. I was definitely pretty happy about winning that award, it's obviously nice to be recognized -- and especially so for something as interesting as research on Mexican music. here I am collecting the prize: Being in St Louis gave me a chance to go to Cahokia for the first time. I used to travel to St Louis once a year but spent most of my time at the annual polka festival. Somehow never made it to Cahokia. here is the large monk mound, it is actually much higher than it looks in this photo: here is the view from the top, that is St. Louis in the background. Cahokia is east of St Louis in a part of Illinois not known for this its prosperity nowadays (to say the least). At the historic site, just beyond a gargantuan tree, stands a trailer park that is current Mississippian Cultur
1 comment
Read more
More posts