A friend of mine who reads this blog and is an academic recently said he was surprised to hear that I had written something negative about MOOCs since he had only heard positive things.  That's funny--I have only heard (and thought) negative things.  Then again, I have been known to hang around with historians, who are a critical and even dour lot who often a good sense of the reliability of gauzy future projections.. (Especially if they have the foggiest idea about the reshaping of labor as it has emerged over the past century as means of social and economic control). Me, I don't intend to take part in (or be silent during) the dismantling of American higher ed, or the hollowing out of the virtues of small colleges and small classes. There has been a lot of discussion about Amherst's big rebuke of edX's MOOCs (and their 2 million dollar price tag).  That was gratifying to hear. "Sitze, though, compared edX and MOOCs to a litany of failed dotcoms, including
Post a Comment
Read more
April 24, 2013 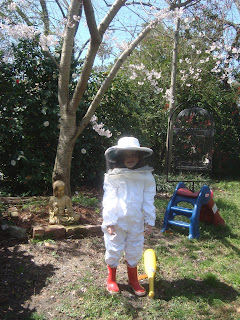 this has been a weirdly cool spring, but the bees don't seem to mind and have been doing quite well. I have been making up a lot of nucs to replace some of the winter losses at the school.  I myself lost no colonies this winter, so there is something about the school that warrants further investigation since bees do not do well there recently for reasons unknown. Lark has been helping me out with the bees this year, here are a few pics of her in the beesuit (which I think is half of the fun. The other half is eating honey).
Post a Comment
Read more

April 12, 2013
My post-1979 class just talked about Occupy a bit, particularly wondering at its results (?). So this piece piece by David Graeber is definitely worth reading  and was timely to have read.  I gather  it is a selection from his new book. A friend of mine has been encouraging me to read Graeber's Direct Action , which is on the stack but as yet I haven't cracked into it.    This will do in the interim: "At the moment, probably the most pressing need is simply to slow down the engines of productivity. This might seem a strange thing to say—our knee-jerk reaction to every crisis is to assume the solution is for everyone to work even more, though of course, this kind of reaction is really precisely the problem—but if you consider the overall state of the world, the conclusion becomes obvious. We seem to be facing two insoluble problems. On the one hand, we have witnessed an endless series of global debt crises, which have grown only more and more severe since the seventi
Post a Comment
Read more
April 12, 2013
I generally feel comfortable leaving the deconstruction of the menace that MOOCs pose to high education to Jonathan Rees over at More or Less Bunk . Everybody should be reading this blog. He is, simply, nailing the multiple issues that MOOCs raise, from the exploitation of labor to the intellectual incoherence of them.  His relentlessness and good sense on the issue brings to mind (albeit focused on other contexts) Glenn Greenwald. We need more of this kind of relentlessness. And yes, I did just use the word "albeit". It's ok. So, since it is being done so well elsewhere, I'm actually not here to whale on MOOCs, just to note a kind of amusing state which illustrates much. The Chronicle of Higher Ed has a story describing how the California State University system is beginning to destroy itself by expanding its use  of MOOCs.  "San Jose State last fall used material from an edX course, “Circuits & Electronics,” as part of a “flipped classroom” experi
Post a Comment
Read more
April 03, 2013 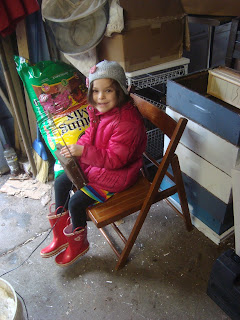 The pictures I posted the other day were a hit so I am yielding to requests for more. Here is Miss Lark sitting in the garage acting as dj while I work on bee equipment.  She loves to change the radio stations on this old radio when I am working out there.  Though he tastes run to top 40, which is pretty rough on the ears. It was rainy and cold this day and she came out dressed like a flapper. I have no idea where she got that hat.   the babies have learned how to open car doors, and are really into it me with the two ladies perpetually smiling, like his mom and like his sister
Post a Comment
Read more

yet another reason to keep bees

April 03, 2013
I was heading home over the weekend and stopped off at a garage sale just a few blocks from my house, where my eye was caught by an upright piano. I have a piano already, though it is a spinet and something that my piano tuner said was sold in the 1950s more as furniture than as a piano.  Made in America, but still more furniture than piano.  This garage sale piano was a full upright that sounded great and for some reason was calling my name.  I called my ever-patient and always-lovely wife and asked her what she thought of me acquiring another piano. She replied, rightly, that I was insane. Being insane, I did not listen to reason.  The price was right. I ended up swapping 5 pounds of honey for this piano. And the guy helped me put it on a dolly and wheel it back to my house and pop it into the garage.  He had five pianos and was happy to get rid of one since he is moving down to Chesapeake (and not far from my beeyard down there either)  5 pounds of honey is a good deal for a p
Post a Comment
Read more
More posts